When I saw this worn and eroded fresco image of Adam and Eve, I knew I wanted to do something with it…..and then it came to me that I should make a triptych with this image as the center panel and two side panels of garden imagery that so many Roman and Pompeian  houses were so beautifully decorated with, such as this lovely image below.

I started with an 4′ x 8′ birch plywood panel cut into three pieces and gessoed it a dark gray. I think I may have found an answer to my problem with the texture of water color paper this way. I liked drawing on the gessoed birch….and so I began with the middle panel…I found Adam and Eve’s body language wonderfully expressive.

Then I moved to begin the side panels, but instead of drawing the floral imagery, what came to me was an image I’d had in a dream of a group of animals, standing in a dark corridor. The giraffe’s silhouette was on the skyline. The animals were all stationary, staring forward in the dim light. In the dream it seemed they were waiting, waiting for humans to come to their senses and connect to nature and other beings again. It was a strong image that had stayed with me. And so my triptych morphed and became about how we lost paradise in putting ourselves over or apart from other living things. It is interesting to see a piece develop in the studio…so different to drawing landscape in which the subject is a given, though may surprise me with color and light during the flow of the drawing. This developed not from conscious thought but from some source within. 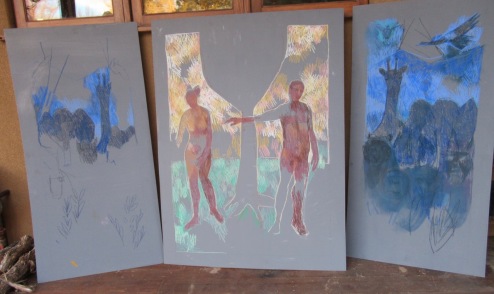 I concentrated for some days on the side panels. I decided to draw animals that are endangered. There are so very many of them. I used computer images. There were  pages and pages of such wondrous and graceful animals in all of their incredible variety. Occasionally though this journey into  beauty would be marred by a photo of a trophy hunter…on the page with the giraffes there was a picture of a smiling woman, grinning in victory, behind a slain giraffe, its long neck limp. I am always utterly bewildered that humans can want to kill such beauty and generally I cry. So it was with tears that I drew the first giraffe. I had never thought I’d be so sad while drawing. But during this process I have often been near tears. What a loss to this world.

And when I went to look at endangered parrots on the computer, the page just kept on scrolling down, such a huge beautiful variety of birds.

So this is as far as I’ve gotten . Yesterday I added the snake. 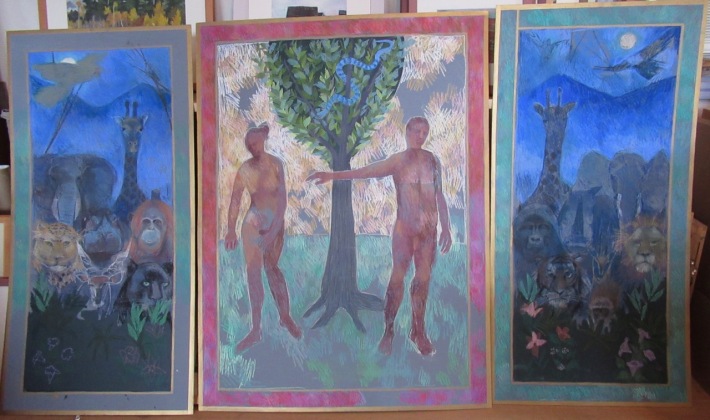 Without my originally intending it, these panels have become a homage. I am glad I can love and revere these beings through drawing.

2 thoughts on “Adam and Eve I”