I hadn’t been to Long Canyon for quite a while. The gnats are so bad in the late spring that I scratch it off my list of places to draw in. But it was time to revisit this wonderful canyon of massive orange-red walls, the coolness of the canyon shadows calling, and so I went and was utterly amazed at it’s incredible beauty. That’s happened before, that I’ve forgotten how amazing Long Canyon is. I guess like horrible pain, one can’t really remember the experience of utter beauty. Lovely to be awed anew.
I thought it would be fun to do a series of small vignettes of the rock walls,  their patterns of light and shadow. Long Canyon is so rich in  color and texture, holes and blotches, whirls, fissures, cracks and stripes, not to mention slabs of pink orange rock arranged every which way, looking like they’re in arrested motion.What a lovely way to spend the morning before the shadows recede. It hasn’t been crowded in August and so I was mostly undisturbed by cars.

I’ve a new dog now, Gus, who is almost 5 months old. He has proven to be a fine  companion who doesn’t wander too far and comes when called and who has a healthy dislike of cars. There’s a wash in Long Canyon right next to the road and it is a lovely place to wander and mostly one forgets the road is there. So after drawing,
we take a walk. 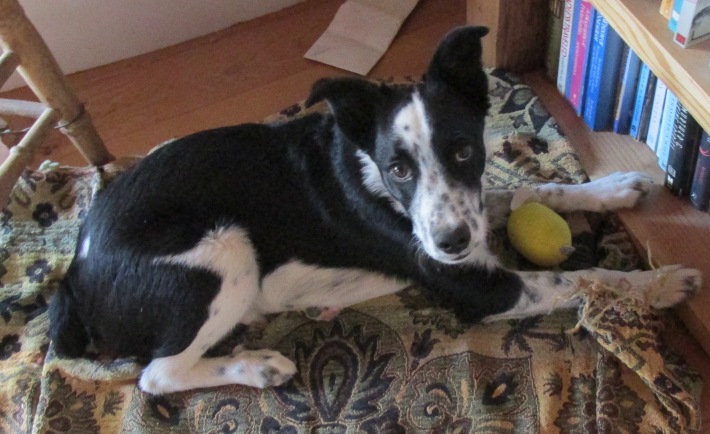 This morning I set up and started to draw. There was quite a bit of insect activity and two large black bumblebees danced by mating in a wonderful loopy dance. Then a primeval creature landed on my car, like an extraterrestrial hornet with a long black body and orange wings.Yikes! 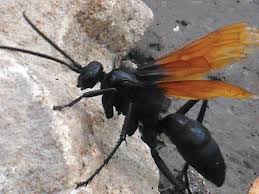 It flew away and I became absorbed once more in drawing.
But then suddenly it was flying right towards me, the orange wings like fire backlit by the sun. I jumped up and away, scattering all the pastels (I have a set on my lap). It swerved off. Whew! I’ve ruined a number of pastel sets when they fall off my easel stand due to wind or the cross bar holding the pastel tray becomes unhinged or whatever other mishap,  and generally I rail at the heavens before getting down on my knees to pick them up. But somehow this time I didn’t get angry. I knew I would do the exact same thing should such a flying fearsome thing zoom towards me again.
And so I salvaged the broken pastels and continued drawing and mostly finished what I was doing. I was quite pleased at my equanimity though it would take hours to reassemble a  set again. At one point a dragonfly passed close by, about the same size as my nemesis, and I thought it interesting that my reaction was entirely different than to the new flying creature I’d spotted.

After drawing Gus and I took our walk in the wash and I felt rewarded by the wonderful descending trill of canyon wrens singing to each other across the canyon.

Back home I googled what I’d seen and was amused to see that it was called a Tarantula Hawk Wasp. A fearsome name for a fearsome looking wasp! Also it has quite a sting….
The following is an excerpt from The Sting of the Wild by Justin O. Schmidt.
“Stung by a tarantula hawk? The advice I give in speaking engagements is to lie down and scream. The pain is so debilitating and excruciating that the victim is at risk of further injury by tripping in a hole or over an object in the path and then falling onto a cactus or into a barbed-wire fence. Such is the sting pain that almost nobody can maintain normal coordination or cognitive control to prevent accidental injury. Screaming is satisfying and helps reduce attention to the pain of the sting. “

So if flown at again I shall again jump up and I just might just scream …..

4 thoughts on “The Tarantula Hawk Wasp”